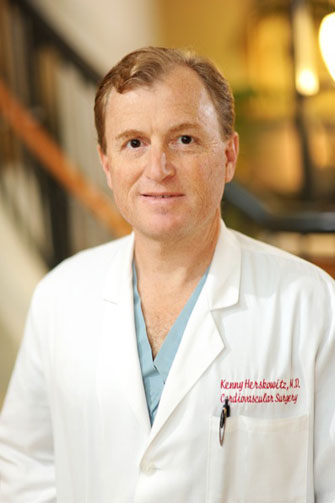 Dr. Kenneth Herskowitz is currently the Medical Director of Cardiovascular and Thoracic Surgery at Broward Health Medical Center. He has been practicing in South Florida since 1992.

He has performed more than 10,000 cardiovascular surgical procedures and is a leading expert in the field of minimally invasive aortic and mitral valve surgery, as well as aortic aneurysms and complex adult cardiac surgery.

Along with an esteemed team, he established the Broward Health Heart Valve Center, where physicians use a multidisciplinary approach to the treatment of structural and valvular heart disease, performing the new Transcatheter Aortic Valve Replacement (TAVR) and Mitraclip procedures, as well as many other cutting edge techniques.

He is a fellow of the American College of Surgeons and Society of Thoracic Surgeons, and holds membership in numerous professional organizations. Prior to entering private practice in 1997, Dr. Herskowitz was assistant professor of surgery at the University of Miami Jackson Memorial Hospital and the Chief of Cardiothoracic Surgery at the Veteran's Administration Hospital.  He is currently a Clinical Assistant Professor of Surgery at Nova Southeastern University.

Dr. Herskowitz strives to bring the highest quality and most compassionate medical care to patients in the South Florida area and has consistently had one of the lowest morbidity and mortality rates in the state of Florida as well as the United States. In 2007, he was honored as the American Heart Association’s honoree for Outstanding Contributions to Cardiac Surgery in South Florida, and has been recognized as a Gold Coast Magazine Top Doctor from 2008 through 2019.